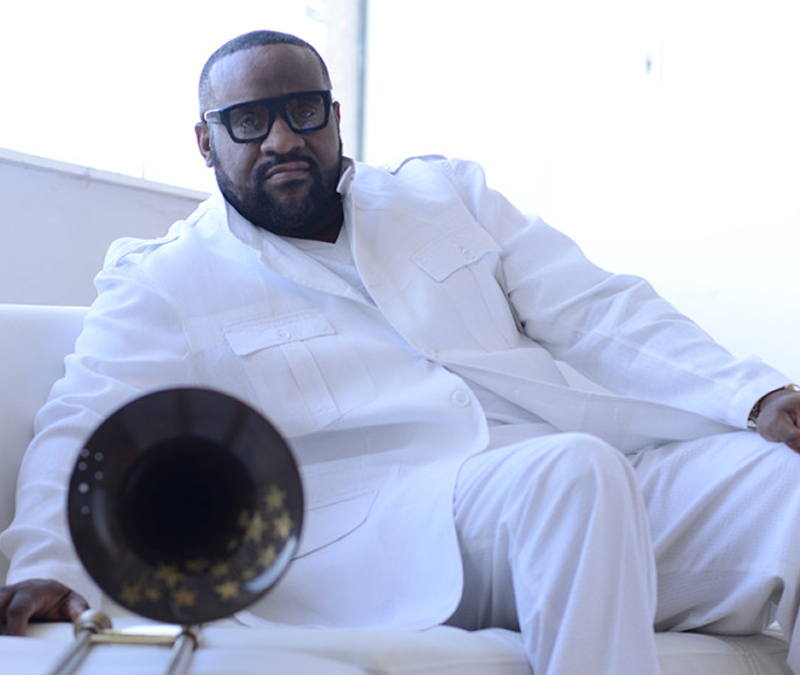 FOR IMMEDIATE RELEASE: Philadelphia, PA (January 11, 2017) –  On Friday, January 20, 2017, Artists First, Inc. and DSE Live presents a special benefit concert, held at the TLA, in honor of jazz and R&B trombonist, Jeff Bradshaw. After publicly announcing being diagnosed with Diverticulitis (intestine disease of the colon), and receiving an out pour of support from fans, friend and GRAMMY award-winning singer Jill Scott organized a benefit concert to help with Bradshaw’s increasing financial medical needs, and awareness about the disease to the public.

Philadelphia native, Jeff Bradshaw has worked with many respected artists in the music industry including: Michael Jackson, Earth Wind and Fire, Tyler Perry, Jill Scott, Jay Z, Erykah Badu, Kirk Franklin, The Roots, Trombone Shorty, and Marsha Ambrosius, to name a few. Bradshaw has toured around the world, sharing his gift of music to uplift and inspire people for 20 years. He has 3 successful albums, and considered one of the most sought after trombonist in the industry. In October 2016, Bradshaw was diagnosed with Diverticulitis after being rushed to the hospital with severe stomach pain. He spent a total of 17 days at the hospital and due to surgery and ongoing medical treatment, Bradshaw could not perform nor play for 3 months. Despite this life-crisis, Bradshaw is dedicated to use his platform to educate the community about the disease and how having a healthy diet can help with prevention, as he states “It is very important that our community is informed about this disease for prevention purposes. I hope my story empowers others to learn from my mistakes and take action with embracing a healthier lifestyle – proper diet, exercise, & wellness.”

The Brotherly Love Benefit Concert, will feature special guest performances by Jill Scott, Kenny Lattimore, Robert Glasper, Najee, Bilal, Algebra Blessett, Raheem DeVaughn, and hosted by R&B singer Eric Roberson. Reflecting on the concert’s artist line up, “I’m extremely humbled by the out pour of love and support for me since announcing my diagnosis with Diverticulitis. To have my friends and peers in the music industry come together to help me build awareness about this disease is a blessing!” states Bradshaw. Portion of the proceeds will go to the GRAMMY MusiCares Foundation, to assist musicians (like Jeff) with resources with medical, housing, and other humanitarian needs. Tickets are on sale via ticketmaster.com. For more information, call: (215) 922-1011.  Social media: @iamjeffbradshaw (IG, Facebook, and Twitter).

About Jeff Bradshaw:
Jeff Bradshaw was born in North Philadelphia. His is father was a minister so his formative musical experiences were in church, where brass bands were a staple. Jeff amazingly never took formal lessons. The first instrument he began playing was the snare drum. Following that he began playing baritone horn and sousaphone. Professionally he has released 3 albums and currently signed with Shanachie Entertainment label. His latestest album, HOME features hit single, “All Time Love,” with Eric Roberson and Tweet, along with “New Orleans Groove” featuring Trombone Shorty. HOME is currently available digitally worldwide. http://shanachie.com/