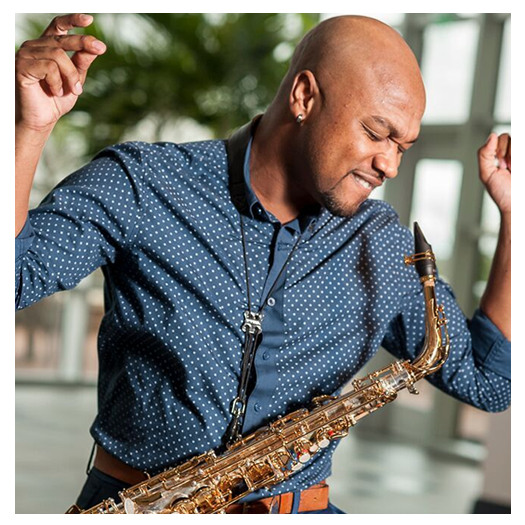 We were selected by Marcus Anderson’s management to rewrite his bio to shorten the biography structure, and present his professional career clearly, concisely and to the point.

A star among stars, Marcus Anderson has definitely become a name among names. A music man from birth, the saxophonist lives for the stage, making him one of the most sought-after musicians in the industry. Having graced the number one positions in both Billboard’s Smooth Jazz and Sirius XM’s Watercolors with the chart-topping track, “A Cup of Joe” from the album And Coffee listeners from far and wide search through Anderson’s collection of eight studio albums for their next favorite jam and to see him live and in action. His work with Prince and the New Power Generation led him to join stages with the likes of Ceelo Green, where he’s become a key contributor tA sight to be seen and a force to be felt, the chart-topper welcomes audiences into his world as they take part in Marcus Anderson and the Experience. Known at festivals as MAX, Anderson and the Experience features the artist as a musician, vocalist, and a performer, delivering electrifying shows with a veteran’s perfection. Marcus is an audience favorite at notable festivals such as the Essence Music Festival, Catalina Island Jazz Trax Festival, Seabreeze Jazz Festival, Capital Jazz Festival, Montreux Jazz Festival, Curacao North Sea Festival and many more. His appearance with headliners on top-ranking shows like The Tonight Show, Arsenio Hall, Jimmy Kimmel Live! and Jimmy Fallon displays a prowess that can only be engineered with time and dedication.

Southern roots and a love for music is the platform from which the Spartanburg, SC native creates. In addition to playing the sax and the flute, Anderson plays the piano, bass, is a singer, a writer, a choreographer and an arranger of horns. Graduating from N.C. Central University’s Jazz Studies Program under Dr. Ira Wiggins established the artist in his dedication to his craft, studying with Branford Marsalis and gospel saxophonist Donald Hayes. He earned N.C. Gospel Announcers Prestige Award for Gospel Jazz Artist as well as many other accolades, propelling his exploration into the styles of R&B, Pop, Rock, Latin and Funk in which he has infused into his music.

When it comes to versatility, Anderson is an act that puts on a show for and with household names. Whether he is performing for dignitaries such as President Barack Obama, Jesse Jackson, and Hillary Clinton or blazing the stage with Sheila E., Anthony Hamilton or Judith Hill in a collaborative effort, Anderson is always the man of the hour, delivering stellar musicianship every time. Lailah Hathaway, Ledisi, Esperanza Spaulding, Wynton Marsalis, George Duke, Jennifer Holliday are just a handful out of the numerous world-renowned artists that Anderson has opened for and with whom he has shared the stage.

Centering music as his vehicle to success puts Anderson in a different lane, as compilations like And Coffee prompted the creation of a coffee brand in which Anderson caters to lovers of the morning brew and jazz with specialty blends and roasts found on www.andproducts.net. Another demonstration of Anderson’s brand-savvy can be found in his limited-edition tenth anniversary CD, Marcus Anderson Experience – M.A.X: Live in Concert featured performances from his international 2015 MAX Tour which evoked superb reviews and exposed Anderson to a new audience. A golden child that constantly evolves his music style and branding efforts in the most humble way, Marcus Anderson’s knowledge, experience, and determination makes him eligible to toot his own horn.

Are you interested in receiving more information on our professional bio writing & re-writing services? Email us at Info@DSElive.com or complete the contact form below.