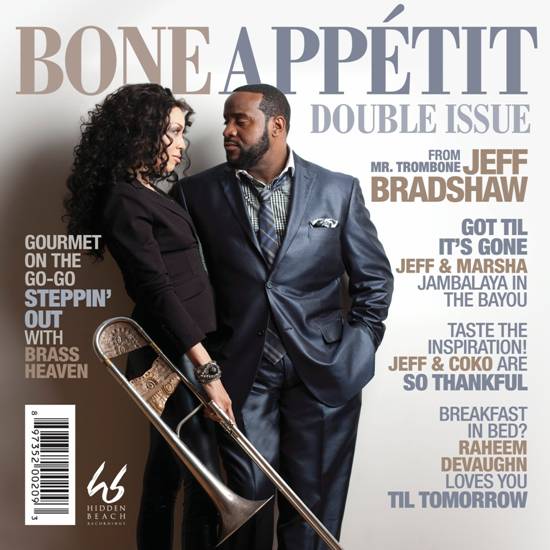 Hidden Beach recording artist “Mr. Trombone” Jeff Bradshaw has made history with his sophomore album “Bone Appétit” as it debuts on the Billboard Contemporary Jazz Album chart three times in the May 12th issue of Billboard. “Bone Appétit” was released April 24th and in its first week “Bone Appétit – Vol. 1 Main Course” landed at #5 with “Bone Appétit – Double Issue” following at #6 and “Bone Appétit – Vol.2 Deuxieme Cours” entering at #24. The album was also positioned at #1 on the SoulTracks.com/Amazon Top 10 Albums chart, a ranking of the top major and independent label Soul releases. A trombone master, Bradshaw delivers a collection of music rooted in Jazz with a host of neo-soul and R&B artists as guests including Marsha Ambrosius, Raheem DeVaughn, Kindred the Family Soul, Maysa (Incognito), Coko (SWV), PJ Morton (Cash Money/Maroon 5) and introducing Brass Heaven. “Bone Appétit- Double Issue” is a Limited Edition which includes Vol.1 and Vol.2,“Bone Appétit- Vol. 1 Main Course” is available as a single CD through retailers Wal-Mart, Best Buy, FYE and independent record stores . Both volumes are available via digital download at iTunes and Amazon.According to Billboard,“In the nearly 20-year history of Billboard’s Contemporary Jazz albums chart, Bradshaw is only the third act – and first since 2007 – to chart three albums simultaneously. He follows Kenny G and John Tesh, who did it on various occasions. “Bone Appetit Vol. 1 (Main Course)” also immediately becomes his highest charting album yet, surpassing the No. 18 peak of 2003’s “Bone Deep.”On behalf of Hidden Beach, Thornell Jones, Jr. of Fortress Marketing explains,“It wasn’t our intent to create such a stir, we simply wanted to get more music out to the fans. It had been nearly nine years since the release of Bone Deep, and Jeff had created a wonderful auto-biographical collection of work that he wanted to share with fans. While each volume will continue to be available on-line, and “Vol.1- Main Course” on CD, the “Bone Appétit–Double Issue” is a Limited Edition and when they’re gone, they’re gone!”Bradshaw who SmoothJazzTherapy.com called “the undisputed master of urban trombone” completed a release week Buzz Tour of east coast cities including Atlanta, Washington D.C., Baltimore, New York City and his hometown Philadelphia. Additional summer tour dates will be announced soon. 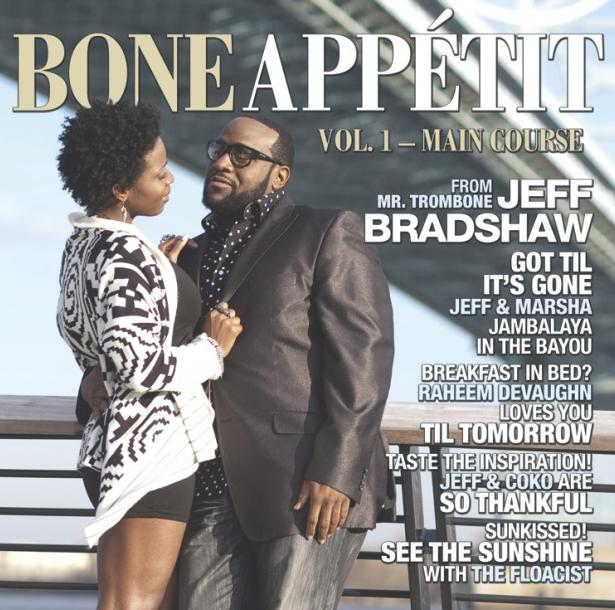 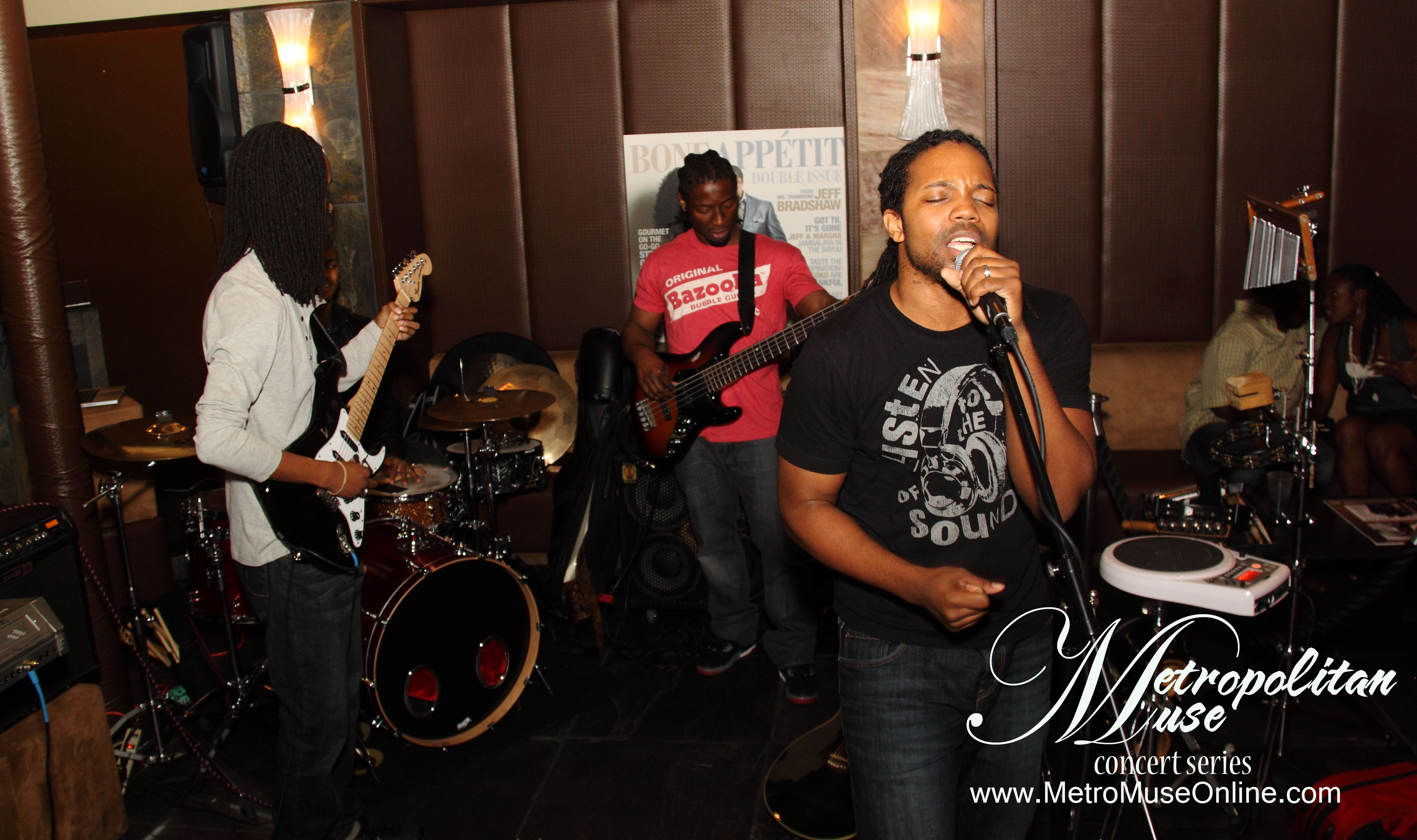 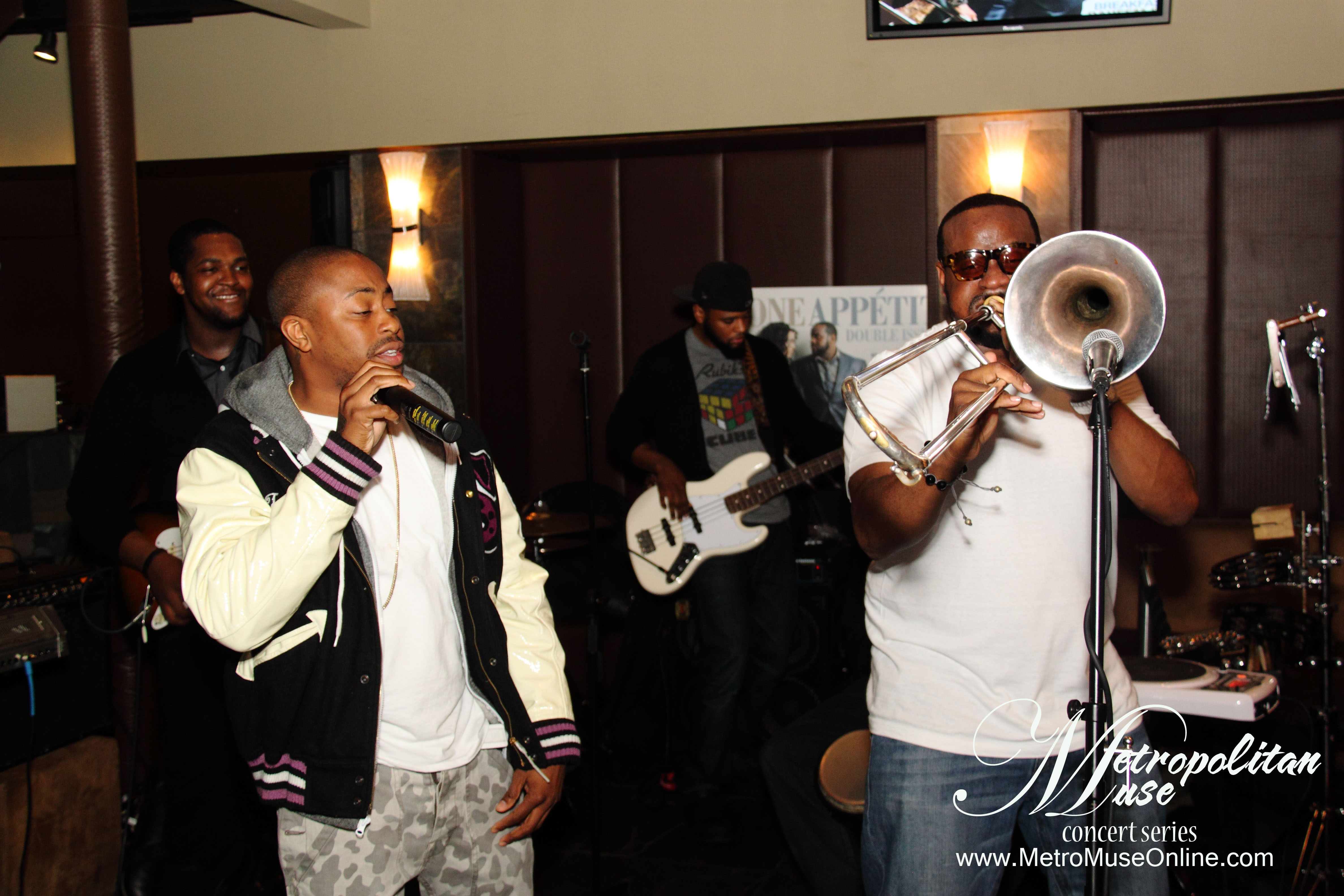 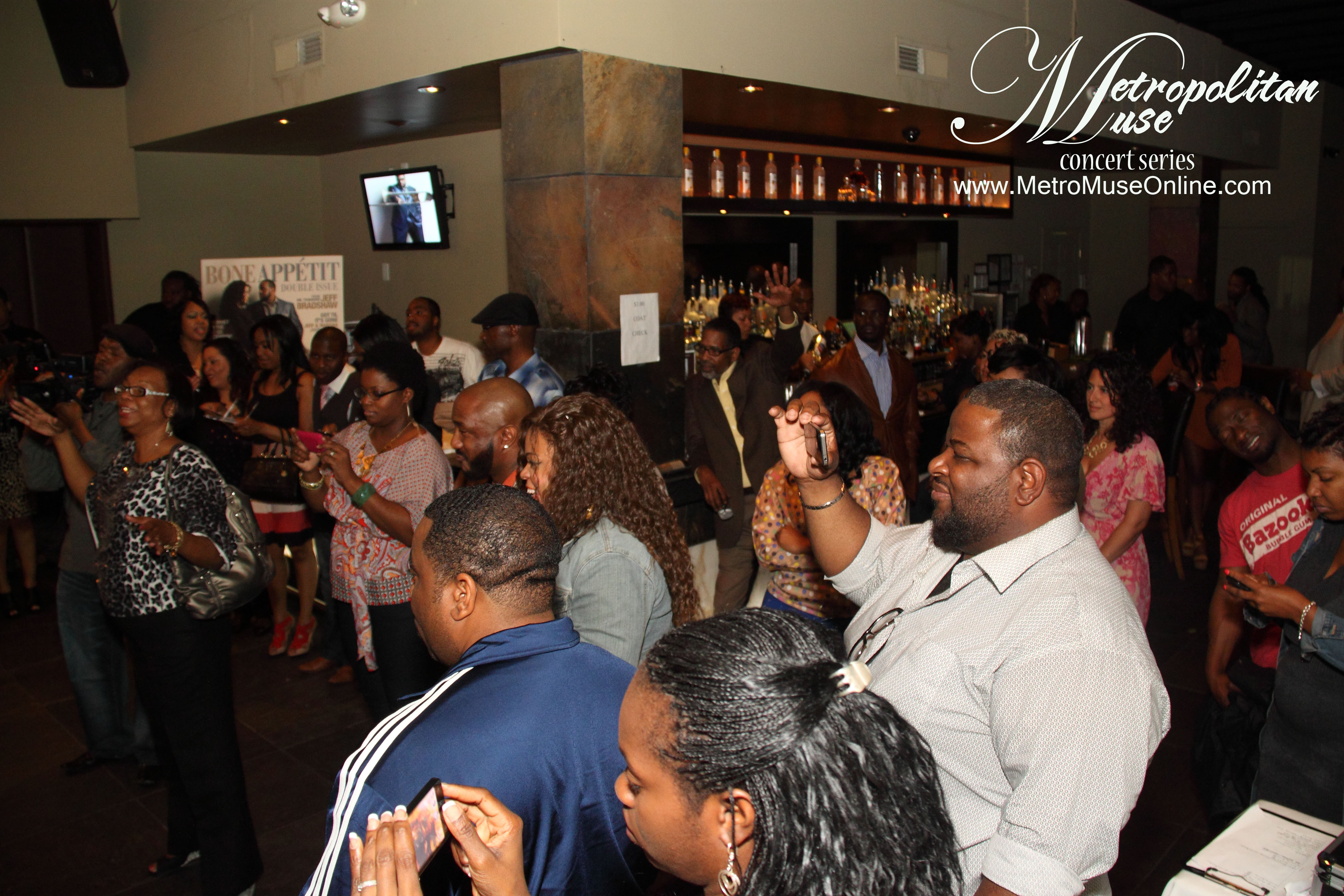 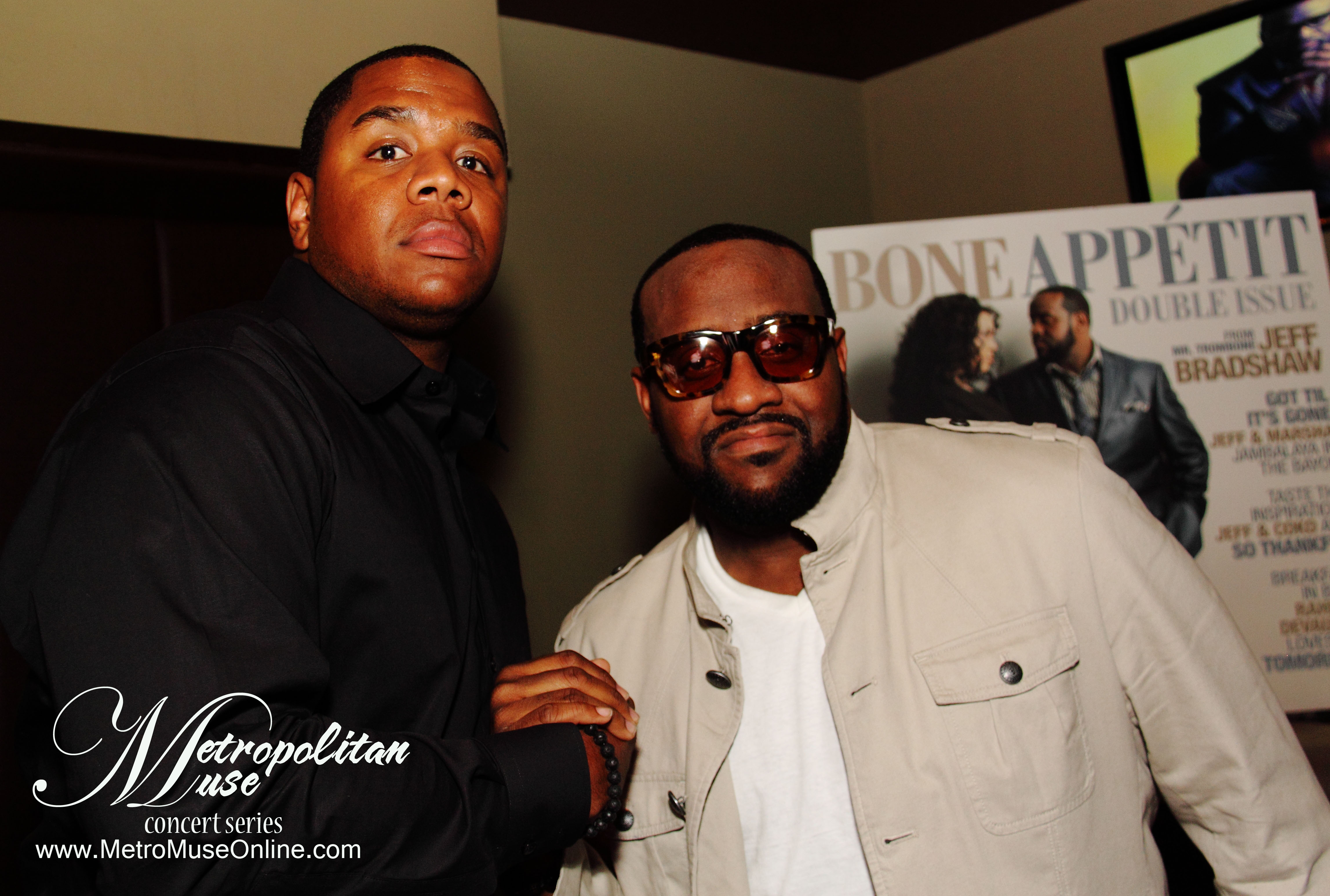 Hidden Beach Recording Artist Jeff Bradshaw arrived in Washington, DC for one night only to celebrate the release of his latest album “Bone Appétit”. He unleashed hypnotic tunes from his trombone as he performed chart topping singles off the new album. The show began with a performance by Ndelible & Bradshaw’s encore performance included a special guest appearance by Washington, DC’s own Raheem DeVaughn! Everyone lined up immediately after the show to meet Jeff Bradshaw and purchase an autographed copy of his latest album. The diverse crowd anxiously gathered for this standing room only show and enjoyed the musical experience created by the finest artistry in the industry. This was definitely a Metropolitan Muse event we will always remember.

Looking for help to achieve your marketing & event production goals? Talk to one of our consultants and see what’s possible.